Some reflections about Nature Conservation and the Law of Evidence

On 15 June 2018 I was involved in an event at the University of Aberdeen alongside my then colleague at the School of Law, Dr Phil Glover. We were joined by Ian Thomson from RSPB Scotland and Tim Baynes from Scottish Land and Estates. An outline of the event (written beforehand) is available here, and some photos and brief commentary from after the event can be found here. There is also a thread of tweets from the @RuralLaw Twitter account, available here. This is a short post to draw together the various resources about the event, and also to develop a couple of topics that were discussed on the day

Why did we host the event?

The whole event spun out of a series blog posts commenting on certain legalities involved with decisions not to prosecute anyone for apparent instances of wildlife persecution – in this case against birds of prey – as reported on BBC Scotland. These posts are digested and commented on in an earlier post on this blog and also a post by Dr Glover at the University of Aberdeen School of Law. That post by Phil sets out some of his academic thoughts on the issue, and flags a comment piece he contributed to the legal journal the Juridical Review.

That sort of explains why we had the event, but why did we have it when we did? Important as the issue of nature conservation is at any time, my ulterior motive for having the event in June 2018 was Phil’s impending move to Perth, and not just the Perth down the road. He has secured a job at Curtin University in Western Australia. I am sorry to see him go and I wish him well. I was not going to let him go without giving him one last hurrah though. Accordingly, I set about trying to organise suitable panel to actually discuss the issue in a practical and pragmatic way, and certainly not in a legalistic or purely academic lawyery way. I was delighted that Tim and Ian agreed to join us in Aberdeen at a time which suited us; thanks again to them for coming to Aberdeen for this.

The event itself involved me setting the scene (see the already linked blog posts for that), then I handed over to Phil to explain the position with regard to non-authorised covert surveillance. (N.B. not illegal surveillance, necessarily, simply surveillance that is operating outside the authorisation regime provided in the Regulation of Investigatory Powers (Scotland) Act 2000.) In some of these instances which have attracted media comment, there has been footage obtained on a camera positioned on land without the prior consent of the owner or land manager. Had this positioning been done by the police, a robust approval process would need to have been followed. It would seem strange if essentially private actors – laudable as their motives of nature conservation may be – could obtain evidence without following any particular process that would automatically be admissible in court. (Please note this is me paraphrasing, criminal evidence lawyers might be cringing at my inarticulate synopsis here.) 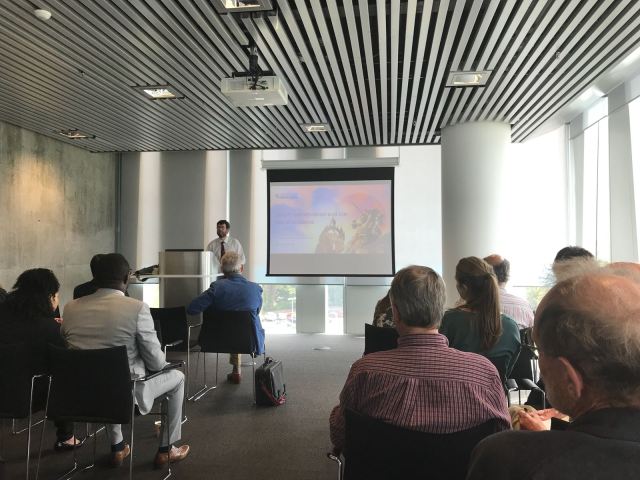 There has also been some discussion about whether – in land law terms – positioning cameras might be allowed owing to the fact that the land is accessible for recreational, educational and even some commercial purposes in terms of the Land Reform (Scotland) Act 2003. I spoke to the reasons why this statute might not actually help private investigations like this, as the legislation does not cater for objects being left unattended on land. Separately, and as has been noted separately in correspondence from the Crown Office and Procurator Fiscal Service dated 30 May 2017 (as explained and linked to in my earlier blog post), access rights are for certain purposes only. Those purposes do not extend to the investigation of crime. 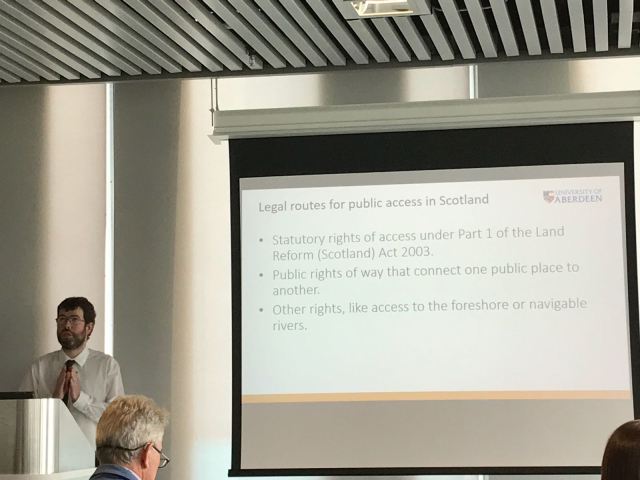 After I spoke, Ian then explained how he saw things from his perspective as an investigations officer at RSPB Scotland. I think it is fair to say his frustration at the difficulties involved in prosecuting those who would cause harm to Scotland’s protected birds of prey (in terms of the Wildlife and Countryside Act 1981) was palpable. Tim then offered some practical views about land management and expressed reservations about widening the admissibility of evidence obtained by covert surveillance, highlighting concerns about privacy for residents and employees. (Privacy was also touched on in Phil’s presentation.)

That was the organised part of the event. And immediately prior to the event, Phil, Ian, Tim, and I were interviewed by Kevin Keane of the BBC for its BBC Radio Scotland show Newsdrive. Our feature starts around 1 hr 45 minutes into the show and is available online here until 15 July 2018. Listening to that, and the comments above, should give a flavour of formal proceedings.

What else was discussed at the event?

This blog post will now try to gather any other insights from the discussion that followed. And it was a wide-ranging discussion. Conversation very quickly moved on to satellite tagging of birds and situations where these have either failed (suspiciously?) or have apparently been tampered with. I am not offering any comment on that, but needless to say evidence of an instance of tampering is not automatically evidence of a crime by an identifiable individual, so it was not really what the seminar was about. Another issue raised in discussion (by Ian) was the analogy of covert surveillance in a residential care home, which might be deployed by a family member to catch mistreatment of an elderly relative: would that be admissible? And is there a difference? (Quickfire answer: perhaps yes, as this hypothetical situation involves criminality to a human, but again I oversimplify.) 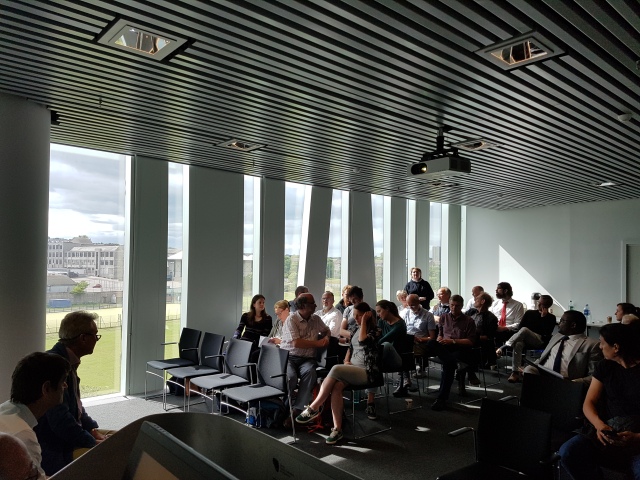 Plenty other matters were discussed, involving privacy matters and (for example) usage of “dashcam” footage taken from passing cars in court.

From all of the discussion, I think three legal comments made on the day are worth noting here, as I do not think they have been raised in detail in this particular context.

First, to amend the Regulation of Investigatory Powers (Scotland) Act 2000 to allow for private surveillance by a body like the RSPB would need primary legislation. That is to say, an act of parliament would be needed.

Second, to allow for the Wildlife and Countryside Act 1981 to operate without having to worry about the regime in the Regulation of Investigatory Powers (Scotland) Act 2000 would also require legislation. This is because of the public law norm that a later statute prevails over an earlier statute when it comes to statutory interpretation. (Thanks to my colleague Mike Radford for this insight. Again, I am probably oversimplifying this.)

Finally, and indeed this was the final point raised on the day, if the law is not able to practically work, is it now time for a licensing regime for the businesses operating in places where birds of prey have been coming to harm?

And having thrown that cat among the pigeons about licensing, I quickly move on. That is probably enough about the law and law reform, I think. In fact, I am acutely aware the law is only part of the story, and at this point I will link to a recent blog post by Isla Hodgson (who we were lucky to have in the audience on the day of the event) which serves as an introduction to many of the aspects involved here.

I know a lot of this is a hotly contested area, and Phil and I have rambled into it with the impunity of academics who are not dealing with the issues day to day. I hope our thoughts have been welcome though. The well-attended and, I think, well-natured seminar that we hosted makes me optimistic that our incursion into nature conservation and related legalities from evidence and land law was worthwhile. I also know the event attracted some interest from the Crown Office and Procurator Fiscal Service, although you will have to take my word for that.

In drawing this post to a close, I will offer links to these tweets reflecting on the event: one from another attendee, Libby Anderson from the charity OneKind…

…and this from one of our speakers, Ian Thomson.

Last but not least, two people who attended the event promptly drew my attention to this story on the BBC about golden eagle eggs being taken from a nest, which happened to be reported on the day of the seminar. I know this is but one report, and anecdotes should not be over-egged, but this does serve to show the issue of raptor persecution is not going away.

I don’t pretend to have a magic law reform solution to offer at the moment.

It does seem fair to say that the laws that are supposed to protect Scotland’s important wildlife are struggling to operate within the existing framework.

Further analysis and consultation will no doubt follow but, from the discussion aired at the seminar and elsewhere, we now know what many of the issues are. Accordingly, it seems fitting to conclude with the words tweeted by Libby Anderson: “Let’s get on with it then.”

Bachelor of Laws. Scots lawyer working at the University of Aberdeen. English law qualified. Took far too long to write this bio. Blogs on legal issues, with occasional veering into other purportedly intellectual stuff from time to time. Tweets about legal issues, education, law clinics, fitba, music, rogue cell division and not at all about politics at @MalcolmCombe.
View all posts by basedrones →
This entry was posted in environment and tagged Access, birds of prey, conservation, evidence, raptor persecution, Regulation of Investigatory Powers (Scotland) Act 2000, RIPSA, wildlife crime. Bookmark the permalink.